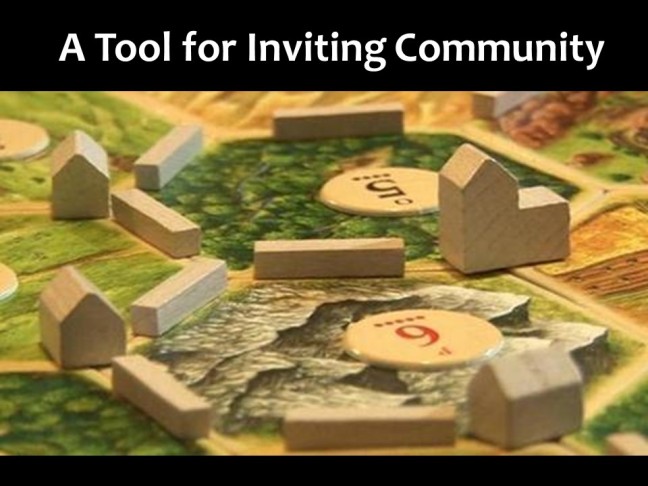 It’s been called the “Monopoly of our Time.” Created by German board game maker Klaus Teuber, The Settlers of Catan has sold more than 18 million copies worldwide. It’s a deceptively simple game. Players compete to build the most successful colony on the fictional island of Catan. At the same time, the game is rigged to force players to work together. Tueber developed it over the years by playing early versions with his wife and three children. He designed the game to be a tool for inviting community.

For many Christians, when they start with the Bible, they feel overwhelmed. We’ve been told it’s a simple book with a straightforward message: “Jesus loves me this I know …” But when you start reading about the unsettling of the Canaanites, Amorites, Hittities, and Jebusites, you’ll probably want to return it to the shelf. To encourage you to keep going back to this book—to read, mark, and inwardly digest it—here are five principles for listening to the Bible. I say, “listen to,” because the Bible is a community book. It was written to be spoken aloud, heard, discussed, and struggled with in a community.

5 Principles for Listening to the Bible

Principle 1: the Bible is God’s tool for inviting community around Jesus.

How do we deal with the Bible in its complex simplicity? How can I know that God decimating the Canaanites at the end of the day means that Jesus loves me?

Start with Principle Number 1: the Bible is God’s tool. We don’t worship the book as an end in itself. Having a large-print KJV enshrined in your living room is not enough. Even if you silently read it to yourself every day, the tool is not yet serving its Maker’s purpose. God conspired in the writing of the Bible to draw you into a community of struggling, yet forgiven sinners gathered in the name of Jesus.

Principle 2: the Bible is complex—it’s a library of books, so pay attention to context.

When you pick up a book in a library, you must respect its genre. A Vietnamese Cook Book can help you make some delicious Phở, but it won’t help you understand the complex political situation of President Ho Chi Minh in the early 1960’s. Harry Potter and the Deathly Hallows is a great parable for understanding the human experience, but it wouldn’t make a good Latin textbook.

To shine Lumos on any text, I must understand it’s purpose and the way it achieves that purpose.

A psalm might aim at the heart; a proverb or letter like James might aim at the hands and feet, whereas the Letter to the Romans aims at renewing the mind (see chapter 12:1–2), which has implications for the hands and feet. Texts like Exodus, 1st Samuel, and Mark are artistically shaped historical narratives.* They treat our eyes and form a worldview (note: all serious historical writings—simply by choosing to write about some stuff, while ignoring the rest—are artistically shaped and biased toward a worldview. (read more about this here). Finally, a text like Jesus’ story of the prodigious father and his two wayward sons is an artistically shaped fictional narrative aimed at upsetting a worldview (more about this here). The Bible is complex. Pay attention to con-text.

Before we get to Principle 3, let’s talk about a tempting false principle.

He was practicing a tempting, false principle: splitting. It was introduced early on by a teacher in the church named Marcion (died 160 A. D.) and is called the Marcionite error. Many of Marcion’s contemporaries, like Irenaeus of Lyons, showed the problems with this solution. It is tempting because it seems to help. If we split off the New from the Old, and see them as two different books with two different gods, we don’t have to worry about these strange OT promises and threats. We can disregard them since they come from that grumpy old god in the first part of the Bible.

Sometimes I lead chapel at an awesome local Lutheran School and work with a seasoned educator, Mrs. J. If you met Mrs. J. outside of school, you would think, “She is among the most kindhearted people I have met.” And she is. At the same time, when you step into Mrs. J.’s classroom, you know she means business. You don’t want to face the wrath of Mrs. J.

How do we make sense of this? How could one person be so gentle in one situation, yet so intimidating in another? Split-personality disorder is a possibility, but I’m confident that’s not the case with Mrs. J. I know she is motivated by deep, abiding love for her students. We don’t have to split up Mrs. J to make sense of her. We can recognize that, while she has a simple motivation of love, she must act in complex ways to respond to complex people within complex situations.

So also, we don’t need to split up the Bible between OT = Judgment / NT = Love. You don’t have to read very far in the NT to see this doesn’t work. Jesus said, “I did not come to abolish the Law and the Prophets but to fulfill them” (Matthew 5:17). The NT writers see themselves completing what was started in the OT.

Principle 3: The Bible is simple; it’s one continuous story of God’s Kingdom coming on earth in the crucified, risen, and returning Jesus.

Like settlers in Catan and settlers in Canaan, God is bringing His kingdom on earth “little by little” (Exodus 32:30)—first in the children of Israel; finally, in Israel’s King, Jesus. Sometimes he works gently, easing people along, like with Moses at the burning bush (Exodus 3–4) and Jesus teaching his disciples on the road to Jerusalem (Mark 10:32–45). Other times he works harshly, like in destroying the people who trusted the Canaanite gods (Exodus 23:20–32), or, when the Jerusalemites rejected Jesus and he warned that his Father would come and decimate them (Mark 12:1–12). We don’t have to split the Bible to make sense of it. The God of the Bible acts in complex ways in complex situations, but always with the simple motivation of self-giving love.

What does the Bible mean by God’s love?

Principle 4: In Jesus and through the Bible, God wants to speak to you personally to lead you to trust Him as a dearly loved child trusts a loving Father.

When the Bible speaks of God’s love, it’s doesn’t mean what North Americans and Western Europeans often mean by “love.” It doesn’t mean letting your acquaintances have their personal space so they can do whatever they feel is best for themselves. The Bible is more Middle-Eastern or Latin American in its definition of love. It’s a love that realizes we’re not made to be solitary individuals who believe the greatest sin is to offend. It’s a love that realizes we are individuals created for a diverse, yet common family centered on Jesus. Because he loves us, he speaks to us and leads us to entrust our lives to him.

In Exodus 23, God assured Moses he would drive out the Canaanites because he hates their gods (Deuteronomy 12:31). God hates … whatever destroys what he loves. His love is no tepid, permissive indifference. It is red-blooded, all-consuming, zealous passion (Exodus 20:4 and John 2:17). He loves us with this kind of love. When we worship his creation, rather than him as the Creator, we destroy ourselves. So God—in both testaments—has declared all-out war on everything that becomes a false god for us.

Principle 5: To receive what God wants to give us in the Bible, we must hold two truths in tension:

We must hold these together.

We can’t let one go. We can’t play them against each other. If we ignore the warnings, if we stop listening to God speak, then we will destroy ourselves on that Day when God finally brings his wrath down on every idol (1 Thessalonians 1:9–10).

So, because of his unfailing love, he keeps bringing us back to the community where he speaks to us in Jesus, through the Bible.

In an interview, Klaus Teuber said that he had once received a letter from an attendant at a mental hospital for children. The attendant told him about a boy there who had never spoken to the other children. He just sat there, isolated and withdrawn. At some point, the boy saw a group of kids playing Settlers. “He came to the other children and started to play,” Teuber told the reporter. Catan became a medium for drawing him out of himself and into a community (full story here).

The Bible is God’s medium. Out of his immeasurable love, he uses it to draw us out of self-destructive isolation, into a community around Jesus.

* I thank Reed Lessing for teaching me this. See his excellent commentary on Jonah, where he compares  Jonah to a portrait of, say George Washington for example: “A portrait is both art and history … On the one hand, in appreciating a portrait, we may admire its artistry … However, we would miss the main point if we would fail to recognize that all this artistry is marshaled to serve a historical purpose—to capture a true and telling likeness of historical events” (6–7).