The other day I was folding laundry in my basement. I looked up and our dog Archie was watching me, with the keenest interest. I said, “What’s up, Archie?”

When we ask Archie a question with a concerned tone of voice, he tilts his head like an Ewok. You get the impression he’s hanging on your every word. 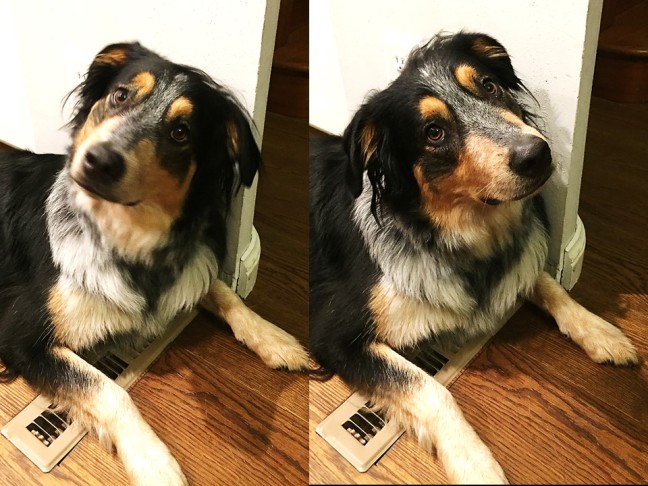 One of my favorite books is Jack London’s The Call of the Wild. Gary Paulsen called it “the classic man-dog story and a grand adventure epic all rolled into one.”

The historical setting is the Klondike Gold Rush of 1900. Tens of thousands of men rushed to Alaska hoping to strike it rich. To make it, they needed dogs. Because there were not enough dogs to go around, dogs were imported, often stolen from the Lower 48.

The Call of the Wild is a story about a fictional dog named Buck, and the transformation he undergoes after he is stolen from his home, sent north, abused, neglected, but finally saved by John Thorton, the man who became Buck’s ideal master.

To get a sense of how Buck feels about his master, read this excerpt, from the end of the book, after Buck has gone through his transformation:

“For the most part … Buck’s love was expressed in adoration … he would lie by the hour, eager, alert, at Thorton’s feet, looking up into his face, dwelling upon it, studying it, following with keenest interest each fleeting expression, every movement or change of feature … And often, such was the communion in which they lived, the strength of Buck’s gaze would draw John Thorton’s head around, and he would return the gaze … his heart shining out of his eyes as Buck’s heart shone out” (95).

This, I tell myself, must be what Archie feels toward me.

Even if that’s not the case, we can compare the Christian life of sanctification to Buck’s transformation in Call of the Wild, by focusing on this one point:

The power of transformation is in being with the master.

The Bible describes the transformation of humankind in four stages:

Buck, in Call of the Wild, also goes through at least four stages. His transformation might be a lens to for understanding the transformation of Jesus’ followers.

“Buck lived at a big house in the sun-kissed Santa Clara Valley. Judge Miller’s place, it was called … Buck was neither house dog nor kennel dog. The whole realm was his … he carried the Judge’s grandsons on his back, or rolled them in the grass, and guarded their footsteps through wild adventures … Buck was king—king over all creeping, crawling, flying things of Judge Miller’s place … he weighed one hundred and forty pounds, to which was added the dignity that comes of good living and universal respect” (1–3).

Listen to how Martin Luther described our first parents before the fall into sin:

“When Adam and Eve knew God and all the creatures …[they] were completely engulfed by the goodness and justice of God.” (Luther, Lectures on Genesis, Vol. 1, 67).

Then Luther speaks specifically of Adam:

“ … completely surrounded as he was by the goodness of the Creator, if Adam had remained in the state of innocence, he would have acknowledged God as his Creator and would have governed the beasts according to His will without any inconvenience, in fact, with extreme joy” (Ibid., 94).

Just as Buck was a dignified king, who let children ride on his back, so also Adam and Eve, in the state of creation, were filled with joy in their royal calling.

Stage Two: the Road to Perdition

The scene begins after Buck is stolen:

“For two days and nights, Buck neither ate nor drank, and during those two days and nights of torment, he accumulated a fund of wrath that boded ill for whoever first fell foul of him. He eyes turned bloodshot, and he was metamorphosed into a raging fiend. So changed was he that the Judge himself would not have recognized him” (9).

“Buck was a red-eyed devil … he drew himself together for the spring, hair bristling, mouth foaming, a mad glitter in his bloodshot eyes. Straight at the man he launched his one hundred and forty pounds of fury … In mid-air, just as his jaws were about to close on the man, he received a shock that checked his body and brought his teeth together with an agonizing clip … He had never been struck by a club in his life, and did not understand … A dozen times he charged, and as often the club broke the charge and smashed him down … Buck crumpled up and went down, knocked utterly senseless” (10–12).

In St Louis, folks from my church work with refugees through an organization called Christian Friends of New Americans. This summer, we offered a vacation Bible School for some of the children. They were doing crafts. A little boy, a refugee from East Africa, kept drawing these symbols. They were gang symbols.

The people he looked up to lived by the law of club and fang. They had been intimidated and tormented. They had accumulated a fund of wrath and found a way to survive.

Buck’s metamorphosis into a red-eyed, raging fiend isn’t the perfect analogy for the corruption of humankind in the state of perdition.

It puts too much stress on sinners as victims of their circumstances, rather than as rebellious children answerable to their Heavenly Father.

But, the analogy is helpful because it helps us remember that without the Word of our Master, we are captive to other masters, led by the law of club and fang.

Buck is transferred between a variety of masters in the Northland; some better than others.

He lands in the hands of one who is hell-bent on destroying him and his sled-mates.

“In their very great misery, [the dogs] had become insensible to the bite of the lash or the bruise of the club. The pain of the beating was dull and distant, just as the things their eyes saw and their ears heard seemed dull and distant … Buck had a vague sense of impending doom … So greatly had he suffered, and so far gone was he, that the blows did not hurt much.”

“And as they continued to fall upon him, the spark of life within flickered and went down. It was nearly out. He felt strangely numb.

As though from a great distance, he was aware that he was being beaten” (85–89).

Have you ever met someone who had so greatly suffered, and was so far gone, that the blows of life did not hurt much anymore?

“Suddenly, without warning, John Thorton sprang upon the man who wielded the club. He was hurdled backward, as though struck by a falling tree. John Thorton stood over Buck, struggling to control himself, too convulsed with rage to speak. ‘If you strike that dog again, I’ll kill you,’ he at last managed to say in a choking voice.

John Thorton and Buck looked at each other. 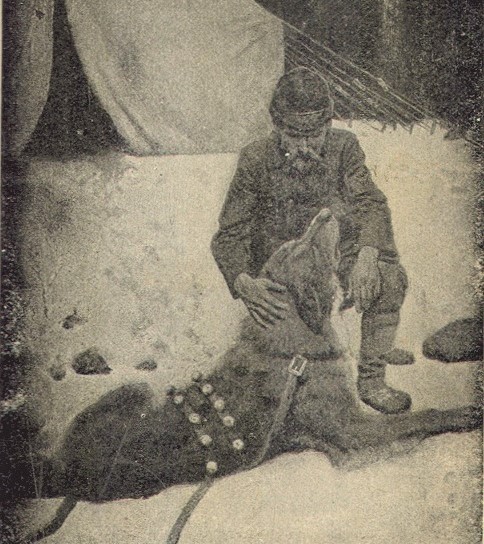 “This man had saved Buck’s life, which was something; but, further, he was the ideal master. Other men saw to the welfare of their dogs from a sense of duty and business expediency; he saw to the welfare of his as if they were his own children, because he could not help it. And he saw further. He never forgot a kindly greeting or a cheering word, and to sit down for a long talk with them … was as much his delight as theirs” (94).

“For a long time after his rescue, Buck did not like Thorton to get out of his sight. From the moment he left the tent to when he entered it again, Buck would follow at his heels. His transient masters since he had come into the Northland had bred in him a fear that no master could be permanent” (96).

For the Christian, the transition from perdition to redemption happens by the intervention of Jesus, the Ideal Master.

Luther writes in the Large Catechism, “Before this I had no Lord and King but was captive under the power of the devil. I was condemned to death and entangled in sin and blindness … but those tyrants and jailers now have been routed, and their place has been taken by Jesus Christ, the Lord” (Article II, para. 27–30).

Justification is being transferred between two masters.

As with Buck, it happens instantly. The instant transfer causes a gradual transformation.

Sanctification is a life-long process that comes from being with the Master.

Like Buck, even after our rescue, we have this inbred fear that our new Master is too good to be true. We doubt God’s faithfulness and permanency, and so continue in our sin. This is captured in the Latin phrase

just yet still corrupt; at the same time saint and sinner.

We are saints, because we have the Ideal Master. Under this Master, we are unlearning the habits of the law of club and fang.

With this Master, we are building new habits of loving God and neighbor. We continue in this third stage, which is the sanctified life, until our death, or the return of Christ, whichever comes first.

Until stage four, we will never be free from the residual habits of sin. Yet, because we’ve been transferred to the Ideal Master, we are free from the controlling power of sin and from the final consequence of sin: separation from God.

On that Day, all the inbred doubts and habits of sin will be burned away. We will experience that joyful confidence and ease by which Adam and Eve served God in the beginning.

But it will be better.

This doesn’t mean we become robots. Rather, we come to share in God’s own nature (2 Peter 1:4). We receive his immortality and incorruptibility.

Jack London gives us a glimpse of this final stage in the transformation of Buck:

“His love for his master seemed to grow and grow … Nothing was too great for Buck to do, when John Thorton commanded.” 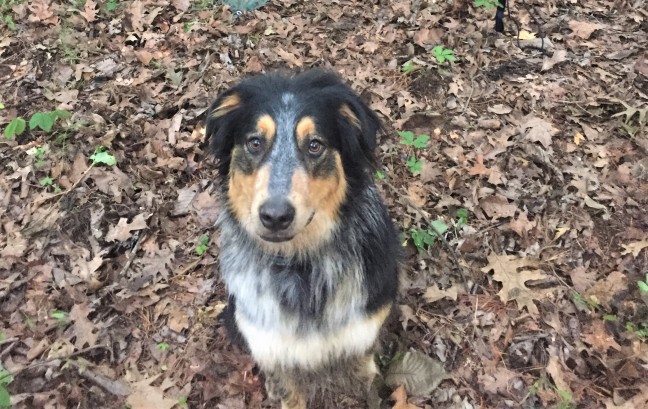 The Gary Paulsen quote is from the foreword of Jack London, The Call of the Wild (New York: Aladdin Classics, 2003).

The four stages of human nature are discussed in The Lutheran Confessions, Formula of Concord, Article II, “Concerning Free Will or Human Powers,” as well as in the earlier Augustinian Tradition. Augustine described humanity “before the law, under the law, under grace, and in peace” (Enchiridion ad Laurentium 118).

4 thoughts on “The Sanctified Life”